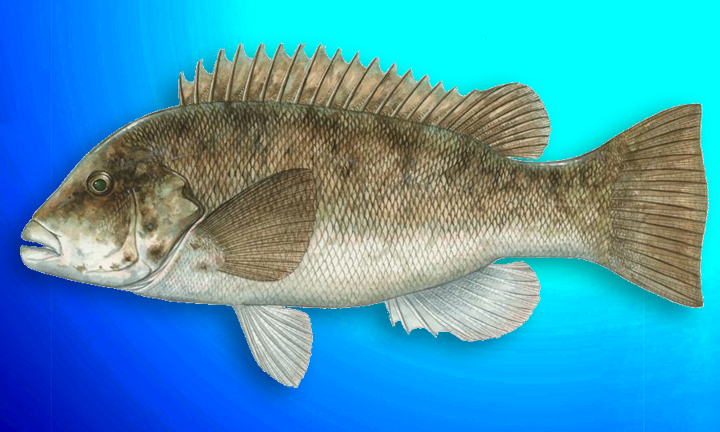 Blackfish, Chub, Tog, Oyster fish
Tautog is a popular recreational species also known as “blackfish” because of its dark mottled sides. The fish live in rocky inshore habitats and have powerful jaws with a set of molar-like teeth that allow them to eat shellfish. They are reported to grow up to three feet (0.9 m) and 25 lbs. (11 kg). Tautog range from Nova Scotia to Georgia along the eastern seaboard.

Tautog is a stout fish with an arched head, broad tail and distinctly thick, fleshy lips. Young blackfish are greenish in colour and darken with age. They have a rubbery skin with heavy slim which protects them in rocky habitats. The fish has a mild, distinct flavour and can be grilled, baked or broiled.

Tautog live in inshore habitats around rock outcroppings, breakwaters, wrecks and other sheltered habitat. It is a highly territorial fish and only moves to slightly deeper water in the winter. This makes them easy to catch and susceptible to overfishing. With its strong jaw, it feeds on mussels and other shellfish. They reach sexual maturity around three to four years of age and are slow growing living up to 40 years. The fish spawn offshore in the late spring and early summer. Eggs hatch in the ocean and then juveniles find protected sheltered waters hiding in seaweed, eelgrass and other marine vegetation. Although they range along the Northeast Atlantic coast, the greatest abundance is between Cape Cod and Chesapeake Bay.